On 16 June a new monument unveiling ceremony was held in Biržai, on the site of the mass massacre of Jews, and planting of the trees for the rescuers of Jews.

Five years ago, Ingrida Vilkienė, the coordinator of education programs at the International Commission, invited the Litvaks Abel and Glenda Levitt from Israel, who were visiting Lithuania, to pay a visit to the Tolerance education center in Biržai, where its coordinator Vidmantas Jukonis, together with his pupils, maintained the old Jewish cemetery and the site of the mass killings of Jews. After visiting Biržai, Abel and Glenda Levitt decided that it was needed to raise funds and to build a new monument to the murdered people, where their names would be  monumentalized. It took five years to implement the project. On 16 June, an event took place in Biržai, where a new monument was unveiled with 522 names, which were succeeded to be identified. As in total 2400 people were shot in Pakamponys in 1941. During the event, names of the people of the Biržai region, who rescued Jews from death, were honored and commemorated.

From the avenue at Žemaitės str. 22, dedicated to the rescuers of Jews, to the forest of Pakamponys the event participants walked in the memorial march. In the forest of Pakamponys, a monument, designed by the architect dr. Joseph Rabie (France), was unveiled. The great grandparents of the architect come from Biržai, and some relatives were killed in Pakamponys. The initiators of the monumental complex are Abel and Glenda Levitt. There were more than 50 Litvaks attending the ceremony, whose roots were in Lithuania. They arrived from South Africa, the United States, Great Britain, Israel, France and other countries. Most of their great grandparents lived in Biržai, some of them were killed in 1941 by Nazi and local collaborators.

The event was attended by Emanuelis Zingeris, Chairman of the International Commission, Members of the Seimas of the Republic of Lithuania, Ambassadors of Israel, Japan, China, representatives from the Ministry of Foreign Affairs, from Jewish Communities of Vilnius, Panevėžys and Šiauliai, museum staff from Biržai, Kėdainiai, Vilnius, pupils from the Tolerance education center of Saulės gymnasium in Biržai, citizens of Biržai and guests from other towns.

The event was organized by Jewish culture and history society of Biržai,  Biržai district municipality, Biržai regional museum. The partners of the event were the Secretariat of the International Commission for the Evaluation of the Crimes of the Nazi and Soviet Occupation Regimes in Lithuania, the Embassy of Israel in Lithuania, the Ministry of Foreign Affairs. 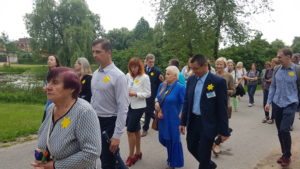