On the 28th of January, the Tolerance education center at Ąžuolas gymnasium in Varėna hosted a conference “The Standing by and around” for the local community.

At the conference, high school pupils analyzed differences in human behavior during the Holocaust in their presentations. The pupils, based on the material from the Yad Vashem institution, spoke of Jewish rescuers, murderers and the completely indifferent, who did nothing to help their own neighbor or an acquaintance.

Ingrida Vilkienė, Coordinator of Educational Programs at the International Commission, presented a film about a woman’s behavior in Nazi-occupied France during World War II, about her choice to help a Jewish man. After reviewing the film, there was a discussion about a person’s ability to choose, about the circumstances in which a human behavior changes.

The event was organized by Tolerance education center of Ąžuolas Gymnasium in Varena. The conference for pupils was dedicated to commemorating the International Holocaust Remembrance Day. 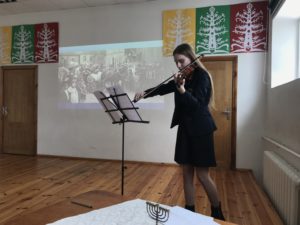