Komisija/tuc naujienos EN/June 14th – the Day of Mourning and Hope. Events in Vilnius

June 14th – the Day of Mourning and Hope. Events in Vilnius

June 14th is the Day of Mourning and Hope in remembrance of the 1941 Mass Deportations to Siberia which began on this day, lasted through 1944-1953 and repressed more than 300 000 lives. Since 2004, the International Commission has been initiating civic initiatives for Lithuanian schools to commemorate the Day of Mourning and Hope. This year schools and Tolerance Education Centers were asked to join the civic initiative “Abandoned Homes…” According to the historians working for the International Commission for the Evaluation of the Crimes of the Nazi and Soviet Occupation Regimes in Lithuania, the total number of repressed Lithuanian citizens in 1941 was 17 500: 11 991 (72,7 %) of them were Lithuanians, 2 045 (13,5 %) – Jewish and 1 576 (10,4 %) – of Polish origin. 5 060 of deportees were children under 16.
The first deportations were mainly concentrated on exterminating the political, military and agricultural elite of Lithuania. A big part of 1941 deportees were taken to Altai region and in 1942 moved to the Laptev sea. The fate of 40 % of deportees stayed unknown (Conclusions of the International Commission 2003 12 17).

Since 2004, the International Commission has been initiating civic initiatives for Lithuanian schools to commemorate the Day of Mourning and Hope. Every year a new event is proposed in order to keep the students interested and motivated to learn history, become aware of personal stories of deportees and political prisoners, and promote creativity.
This year schools and Tolerance Education Centers were asked to join the civic initiative “Abandoned Homes…” The idea was inspired by the memoirs of deportees and political prisoners – most of them contain heart-breaking stories about the last glimpse at their parents and grandparents home before being exiled to Siberia. Students and their teachers read the memoirs, had discussions about what feelings could people have experienced on their way to nowhere and, finally, made model cardboard houses with thatched roofs, typical of that time Lithuanian village. The Abandoned Homes were then displayed publicly, students read pieces of memoirs, shared their own thoughts.

Events in Vilnius
In Vilnius, it is a tradition to have commemoration events of the Day of Mourning and Hope in two places: Aukų street and Naujoji Vilnia. Students from Tolerance Education Centers in Vilnius and Alytus Adolfas Ramanauskas-Vanagas Gymnasium presented their “Abandoned Homes“ installation in two public state events. There were also ex-deportees and political prisoners, politicians and other guests. The President Dalia Grybauskaitė emphasized that June 14 is not only the day of Mourning but also that of Hope, and this hope helped the deportees to survive. Emanuelis Zingeris, the chairman of the International Commission, highlighted the need for purposeful patriotic education of the young generation. He expressed hope that Lithuanian International and Security politics could ensure that similar events do not repeat in the future. The official commemoration events in Vilnius were organized by the Secretariat of the International Commission together with other institutions of Lithuania. 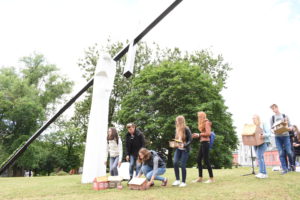 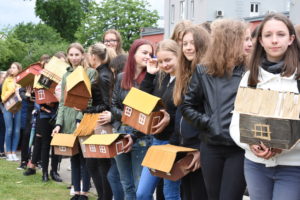 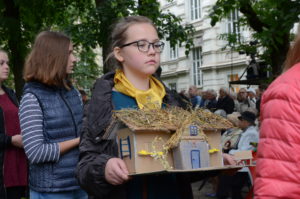 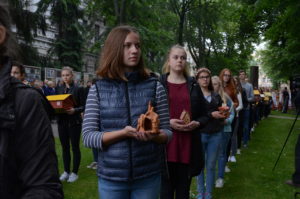 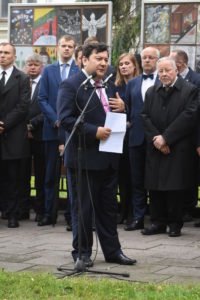 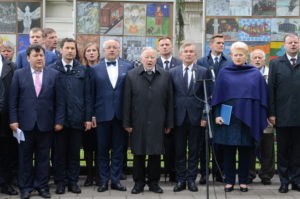