On 4 June 2019 Ambassador of the Republic of Lithuania to the State of Israel Edminas Bagdonas awarded Mr. Abel Levitt and Mrs. Glenda Levitt with the Medal of Honor of the Ministry of Foreign Affairs “Lithuanian Diplomacy Star”. The award was bestowed for fostering relations between the Republic of Lithuania and the State of Israel and commemorating historical memory.

Abel and Glenda Levitt have been actively promoting the preservation of the Jewish heritage in Lithuania and spreading this message in Israel since 2001. Together with the Yakov Bunka Foundation, they raised funding for arrangement of the Jewish massacre site in the forest of Kaušėnai near Plungė. They patronize the Tolerance education center at Saules gymnasium in Plungė, and since 2005 they have been initiating Ronald Harwood‘s Artistic expression festival, which annually takes place at this gymnasium.

In order to commemorate the Jewish heritage in Biržai, they actively cooperate with various institutions in Lithuania: the Secretariat of the International Commission for the evaluation of the crimes of the Nazi and Soviet occupation regimes in Lithuania, the Ministry of Foreign Affairs, the Embassy of Israel in Lithuania, the Tolerance education center of Biržai “Saules” gymnasium, the museum of Biržai and Biržai district municipality. 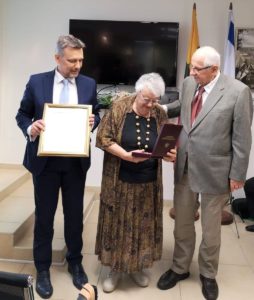