Every year, as 11 March – the day of restoration of Independence of Lithuania- approaches, general education institutions are invited to join the citizenship initiative “The living flower of the nation”.

The civic initiative “The living flower of the nation“ was held for the sixth year to celebrate the important date of the Lithuanian State – the day of restoration of Independence – in a happy and creative way. Teachers, educators, students, children of all educational institutions (schools, preschool education institutions) were invited to use colors of the Lithuanian national flag (yellow, green and red) to create a live composition and to make photos for the record. Later, a photo gallery would be made of the photos sent, where you can see the creativity of students and teachers.

The civic initiative “The living flower of the nation” has been taking place in Lithuania since 2014, initiated by the International Commission together with the authors of this idea – Kastyčio Ramanausko kindergarten in Panevėžys.

More moments from the civic initiative of 2019 in the photo gallery. 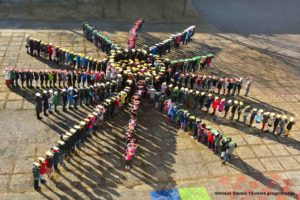