On 21-22 May the Kuliai gymnasium in the district of Plungė hosted a seminar for a group of Lithuanian teachers, which in the summer of 2018 was attending an internship in Israel, in YadVashem – an international school of the study on the Holocaust.

The seminar, held at Kuliu gymnasium, was a follow up seminar – Lithuanian teachers, educational staff introduced activities implemented, the projects that were influenced by their internship in YadVashem: lectures, methodological material and methodology presented. A lecturer from YadVashem – Ms.Noa Sigal introduced literary texts that illustrate the theme of Jewish rescuers and the human dilemmas, faced by ghetto prisoners and rescuers of the Jews.

Participants of the seminar went on an excursion around the district of Plungė, hosted by Eugenijus Bunka, the head of Jakov Bunka support and charity foundation, who introduced the history of the Jews in Plungė. Participants of the seminar visited the former Jewish cemetery, the monumental mark at the Plungė railway station, the monument “For all the good citizens of Plungė”, the mass massacre site of the Jews in Kaušėnai. Participants of the event, accompanied by Eugenijus Bunka, visited the Litvak Garden, where unique metal apple trees with apples remind of Jewish communities in Lithuania that lived before World War II.

On the second day of the seminar, the little town of Kuliai was reviewed, the history of which dates back to the 16th century. The history of this town is also associated with the local Jewish community, which was eliminated in 1941. A monumental stone with the names and surnames of the killed Jews was built in an independent Lithuania. A teacher of history Kazimieras Garasimavičius and the head of the Kuliai regional museum Andrius Petraitis take care of preserving the Jewish history of the town of Kuliai. Thanks to them, a memorial stone was installed for Eta Odesaitė in Kuliai, who was killed at the end of the Nazi occupation on 19 July of 1944.

The seminar was organized by the Secretariat of the International Commission together with the gymnasium in Kuliai, the Kuliai regional museum and the international partner – YadVashem – an international school of studying the Holocaust in Israel. 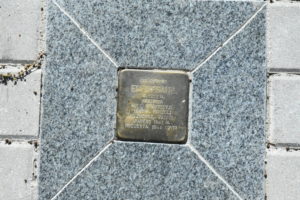