Komisija/Naujienos EN/A seminar at Kaunas IXth Fort Museum invited to get to know the authors, who wrote in Yiddish

A seminar at Kaunas IXth Fort Museum invited to get to know the authors, who wrote in Yiddish

On 14 October a seminar for teachers, museum staff and anyone interested in the history of Lithuanian Jews, famous Litvaks, who wrote in Yiddish, was held at Kaunas IXth Fort Museum.

This one-day seminar “Pages of Jewish history. Introduction to Yiddish language and literature ” was attended by teachers, museum staff and representatives of Kaunas Jewish community. The seminar was opened by Marius Peciulis, director of Kaunas IXth Fort Museum, expressing his satisfaction that the museum hosts lectures and events not only about the extermination of Lithuanian Jews, but also about the life of the Jewish community before the Holocaust. Ingrida Vilkienė, coordinator of education programs at the International Commission, presented the story of the Holocaust survivor, Fania Brancovskaya, showing an excerpt from a film “We remained human” by Yad Vashem institution. At the beginning of this film the story of Lithuanian Jewish life before World War II is described and Fania Brancovskaya tells that only Yiddish was spoken at home.

At the seminar lectures on Yiddish writers – Litvaks were delivered by dr. Mordehay Yushkovsky (Israel). The lecturer presented not only the Litvaks’ creation, but also told funny stories from their lives, read excerpts from their works, told about their destinies and cultural heritage. According to lecturer Mordehay Yushkovsky, “it is just incredible that I give lectures on Yiddish cultural heritage in a place where during World War II people, who spoke this language, were killed.”

The seminar was organized by the Secretariat of the International Commission together with the museum of the IXth Fort in Kaunas and the Yiddish center of the World Jewish congress in Vilnius. 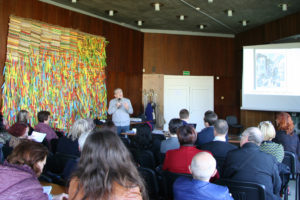 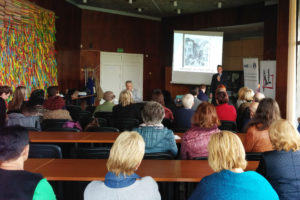