Civic initiative “The memory path” in educational institutions of Lithuania

About 200 Lithuanian general education institutions, centers of Tolerance education and museums marked September 23rd and joined the civic initiative the “Memory path”. School communities visited mass murder sites of the Jews, read out the names of the murdered Jews, teachers told about the Jews who lived before the Second World War and the brutal destruction of local Jewish communities.

Some examples of how the Tolerance education centers remembered large Jewish communities of Lithuania, which were destroyed during the Holocaust:

The gymnasium in Kalvarija on September 21st listened to a story of one house, narrated by the writer Violeta Palčinskaitė. Her work was integrated with the music of Vygantas Kazlauskas. During the event, the history of the house of the writer’s grandparents, the Jews of Kalvarija, was remembered. The house that was touched by the peripatetics of the totalitarian regimes, which directly touched the town of Kalvarija and its community. The meeting was attended by pupils, teachers, and members of the town community.

On September 24th the lesson of history was unconventional for the 6 graders; they visited the old Jewish cemetery of Kalvarija, the site of massacre at the lake of Orija, read out name of the inhabitants of Kalvarija, who were killed in September of 1941, remembered the life of the town before the war, talked about the fall of humanity by destroying others.

The pupils of Sasnavos middle  school of Marijampole municipality paid homage to the Holocaust victims on the mass massacre site of Marijampolė within the valley of the river Šešupė. After honoring the victims of the Lithuanian Jews’ Genocide, they visited the memorial museum of Kazys Grinius, the President of Lithuania, in order to remember that the President and his wife Kristina Griniuvienė hid the Jews in their home during the German occupation and they have been given the names of the righteous of the world’s nations for their merits in rescuing the Jews.

Pupils from 6-8 grades of Radviliskis V. Kudirkos progymnasium together with their teachers implemented an integrated project “Following the paths of the Jews’ memories “. During the project pupils became acquainted with the Jewish culture, traditions, customs, a painful history, learned to write and speak words in Yiddish. The pupils, while visiting the site of massacre of the Jews of Radviliškis and the cemetery created a symbolic menorah – a tombstone, made of decorated stones and candles,  and also tombstones, featuring the flag of Israel, the star of David, the names of the deceased and the name of Radviliskis in Yiddish.

The commemoration of the Day of Commemoration of the Victims of the Genocide of Lithuanian Jews in Darbenų Gymnasium of Kretinga district was marked by conducting history lessons for pupils “To hug the past simple” – about the memory, about the history of the 600 years together, about the community of the people, having lived in Darbėnai, about forgotten names and people, about a professional photographer of the pre-war town Elijah Bruckus and his works. There were 30 photographs exhibited, featuring Lithuanian family celebrations, important life events, pictures of the town and surrounding villages. The white frames left among the photographs invited to bethink not only of the obscure and lost pictures, but also of the necessity for the historical memory.

Pupils of Salomėja Neris School in Vilkaviškis created an artistic installation “They are still alive in our memory” – they planted heaths in old shoes. There is not a single person left after the mass murders, but their items remained symbolizing that such a community resided here, and the plant – as if it was a token of life that the Jewish people who were killed, stayed in the memory of Lithuanians. The installation decorated the cemetery of Vilkaviškis Holocaust Victims, where the Day of Commemoration of the Victims of the Genocide of Lithuanian Jews was commemorated. The sixth graders prepared a literary-artistic composition “Letters from the beyond”. Amir Maimon, Ambassador Extraordinary and Plenipotentiary of the State of Israel to Lithuania, was also present at the event. 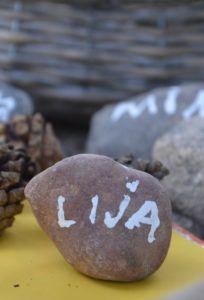 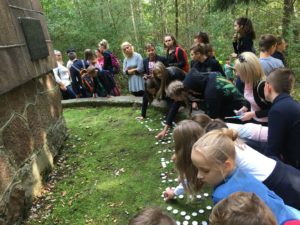 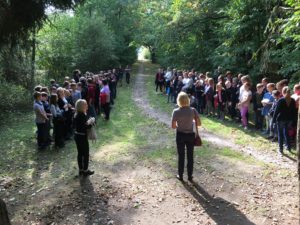 You will find more moments from the civic initiative in the gallery.