Komisija/tuc naujienos EN/Commemoration stones for the Holocaust victims are already in Alytus, Kuliai and Ukmergė

Commemoration stones for the Holocaust victims are already in Alytus, Kuliai and Ukmergė

On 23 September in Alytus, and on 24 September in Kuliai (Plungė district) and in Ukmergė memorial stones were placed to remind of the murdered local Jews in these towns.

On 23 September in Alytus, on the street of Vilniaus, a memorial stone ceremony was held for the Jews of Alytus, i.e. for Mendel Bokshicki, Hirsh Kalmanavich and Shmuel Beiral. The idea of commemoration stones in Alytus was generated by two teachers: Meile Platūkienė from Tolerance Education Center in Alytus Adolfo Ramanausko – Vanago Gymnasium and Vilija Baguckienė, a coordinator of Tolerance Education Center in Alytus Putino Gymnasium. At the beginning of 2018, the teachers attended a seminar organized by the Lithuanian Center for Human Rights, which presented a memorial stone project. The municipality of Alytus supported the idea of commemoration stones as well.

On 24 September there was a memorial stone, set in Kuliai for a Jewish girl Eta Odesaitė, who lived in this town and was murdered. The installation of this memorial stone was arranged by Kazimieras Garasimavičius, a teacher of Kulių gymnasium, and Andrius Petraitis, the head of the Kuliai Regional Museum.

On 24 September in Ukmergė, two commemorative stones were enclosed into the town’s pavement: for a photographer Maušas Levi and at the former Great Synagogue  in Ukmergė for  Rabbi Josef Zusmanovich. The installation of these memorial stones was taken care of by Ukmergė Senamiesčio school and the Tolerance Education Center of the Veprių middle  school and active teachers Aldona and Juozas Vitas Medonai.

The first memorial stones (Germ.Stolpersteine) are commemoration plates, installed in the pavements or street-floorings in 2016 were intended to commemorate the victims of national socialism, remembering the Jews and Roma who were killed during the Holocaust in Vilnius, Kaunas, Šiauliai and Panevėžys. 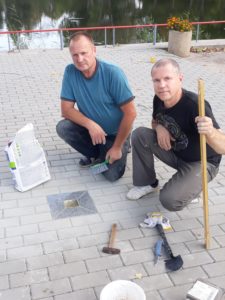 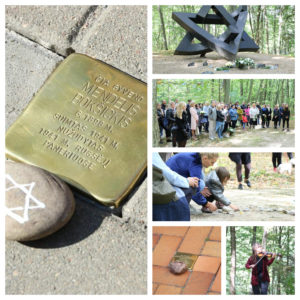