On 22 May three Commemoration blocks /Stumbling stones/ were installed on Vilnius street in Alytus to commemorate family members of Mendelis Bokšickis, a lawyer and a prominent figure in the inter-war Alytus society.

Last year in September at the house No.27 on Vilniaus str. a stone was installed for a lawyer, Mendel Bokšickis, the founder of the Alytus police and volunteer firefighting brigade. On 22 May this year three more stones were placed here – commemorating the memory of M. Bokšickis’ wife, Sheine (Jenia) Kronzon-Bokšickienė, and M. Bokšickis‘ son Saadia Bokšickis Bahat and daughter  Lilija Bokšickytė Winterfeld, who came from Israel. The stone-laying ceremony was attended by Israel Ambassador to Lithuania Amir Maimon, M. Bokšickis’ son Saadia Bokšickis Bahat together with his family members, Alytus society.

The commemoration stones are commemorative plaques laid in footpaths or street pavements to commemorate the victims of  national socialism. Stumbling Stones remind of the people who perished in concentration camps, or were killed at places of massacre, or tortured to death in prison or who otherwise suffered in the Holocaust.

The memorial ceremony of the commemoration blocks was organized by Meilė Platūkienė, the coordinator of Tolerance education center of Alytus Adolfas Ramanauskas-Vanagas gymnasium, in cooperation with  the specialists of Alytus town municipality and Alytus regional museum. 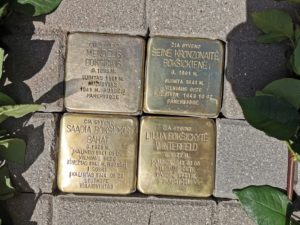