In June 12-15, Kėdainiai “Atžalynas ” gymnasium hosted the guests of the project “TILTAI-BRIDGES-בריקן ” – Jews of Kėdainiai origin from Australia, England, Israel and USA.

Guests were introduced to the Tolerance Education Center at Kėdainiai Atžalynas Gymnasium. Project activities related to the former Kėdainiai Jewish community were presented. The meeting was attended by Israeli Ambassador to Lithuania Amir Maimon, Kedainiai District Mayor of the Municipality Valentinas Tamulis.

In commemoration of the Day of Mourning and Hope, memories of a Keidaner,

Menachem Klibansky, whose family was deported on June 14, 1941 and spent 16 years in Siberia, were read by Keidaners and students.

By preserving the Jewish memory, students contribute to fostering Jewish cultural heritage in hometown – Kedainiai. Recently a project called “Maceva” has been carried out. Students have already cleaned the monumental stones in the old Jewish cemetery in Kedainiai. Now

the monuments are photographed, their photos are sent to Israel, and Ben-Tsion Klibansky reads the inscriptions in the old monuments. Accumulated information will be presented to Kėdainiai community. During the meeting, the communion between the Jews from Kėdainiai and young residents of Kėdainiai became stronger.

Moments of the meeting: https://www.youtube.com/watch?v=pZXBEuPfeFc 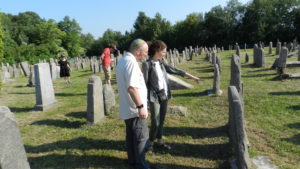