September 22 was the day when students from Vilnius and other Lithuanian towns gathered in Paneriai memorial to commemorate the victims of the Holocaust. “Ąžuolas“ Gymnasium students from Varėna read touching and heart-rending poetry by the Holocaust survivor Stanislav Rubinov. Students had pebbles decorated with the names of people and communities killed during that dark period and carried them all the way from Paneriai train station to the Memorial of the Holocaust Victims. While students from “Saulėtekis“ School – Multifunctional Centre were performing a song in Yiddish, students from Varėna placed the pebbles on the monument in the shape of the
map of Lithuania which was the symbol of the Lithuanian Jewish communities eradicated during the genocide.
Special guests – Emanuelis Zingeris, head of the International Commission, Ronaldas Račinskas, Executive director and a historian Saulius Sužiedėlis, head of the International Commission Nazi Subcommittee – made their speeches on the manslaughter that took place in Paneriai.
The civic initiative “Memory Road” is an open invitation for teachers and their students to remember the Jewish communities massacred during the Holocaust, and follow the paths which victims had to go along on their way to their death places. Lithuania has more than 200 of these tragic locations. 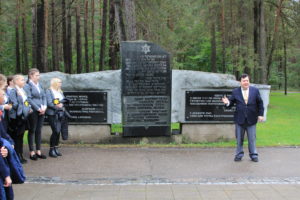 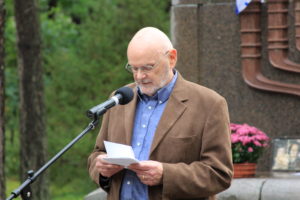 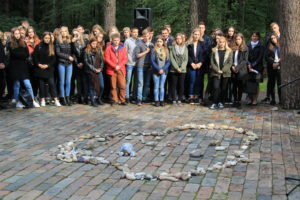