The Olympians of interwar Lithuania were honored during a cycling trip

On 28 June in Šiauliai, a bicycle campaign was held on the city streets, dedicated to the memory of the cyclists who took part in the Summer Olympics of 1924  in Paris: Isaac Anolik and Juozas Vilpišauskas.

The event in honor of the interwar Olympic cyclists has been organized for the third year. The idea of ​​a bicycle campaign belongs to the Jewish community of Šiauliai county because one of the cyclists, who participated in the Summer Olympics of 1924 in Paris, was a resident of the Jewish origin from Šiauliai Isaac Anolik. The fate of this interwar cyclist was tragic – a sportsman from Šiauliai, who later on lived and trained in Kaunas, got into the ghetto and was subsequently shot down in the IXth fort in Kaunas. The fate of the other Lithuanian cyclist Juozas Vilpišauskas is also unknown.

The participants of the event were not only residents from Šiauliai, there were guests from Kaunas, Ukmergė, Žagarė and Vilnius. The organizer of the event was the Jewish community of Šiauliai county. 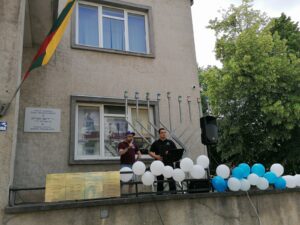