On September 23, commemorating the Day of Remembrance of the Victims of the Genocide of Lithuanian Jews and marking the 77th anniversary of the liquidation of the Vilnius ghetto, on the initiative of the International Commission for the evaluation of the crimes of the Nazi and Soviet occupation regimes in Lithuania people marched on „The Memory Road“ to the massacre sites of Jews all over Lithuania.

The biggest commemoration of the “Memory Road” took place in Vilnius. The sounds of shofar’s horn announced the beginning of the commemoration in Rūdninkų square. At the beginning of the event, Ronaldas Račinskas, the executive Director of the International Commission, recalled the words on the Holocaust victims said more than a quarter of a century ago by Marija Rolnikaitė, a prisoner of the Vilnius ghetto: “… never forget that they were deprived of their lives due to some people‘s hatred towards others. Resist this hatred, no matter in what way it manifests itself and justifies it, so there would be no need ever again to mark such anniversaries … ” During the commemoration event, schoolchildren presented literary and artistic compositions based on the memories of the victims of the Holocaust. The event participants were addressed by the Chairman of the International Commission Emanuelis Zingeris, the Minister of Education, Science and Sports Algirdas Monkevičius, the Minister of Culture Mindaugas Kvietkauskas, the Chancellor of the Government Algirdas Stončaitis, the Ambassador of the State of Israel Yossef Levy, Archbishop Gintaras Grušas. Representatives of Vilnius and Kaunas Jewish communities, foreign diplomats, schoolchildren and teachers took part in the commemoration. After the event, the participants walked to Vilnius railway station and continued their march from Ponary railway station to the Ponary memorial.

The traditional civic initiative “The Memory Road” has been organized for the tenth time. The initiative is an invitation for teachers and schoolchildren to remember large Jewish communities of Lithuania eliminated during the Holocaust, and to march to the massacre sites on the roads which the Jews had to take on their last journey. This year the “Memory Road” events took place all over Lithuania, in more than 50 places.

The Memory Road  and Ponary March of the Living was organized in partnership with the European March of the Living Network and International March of the Living organization. In his congratulation letter Chairman Dr. Shmuel Rosenman stresed taht „ Our common goll is to ensure that the Holocaust will not become a faded memory, but rather a lesson that every human being carries in his heart forever“ He wished to participants: „So let it be your first step on a lifetime journey of fighting hatred and injustice and of creating a world where every single human life is valued” 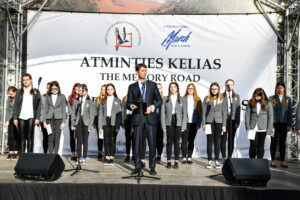 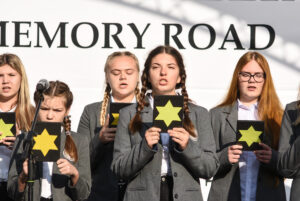 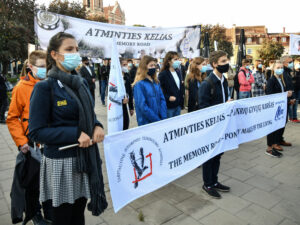 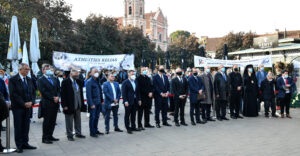 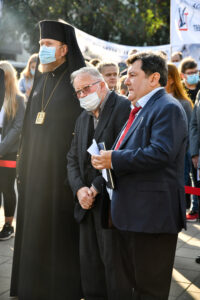 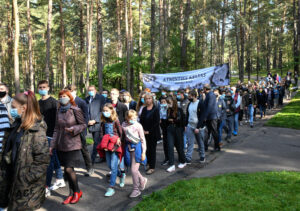 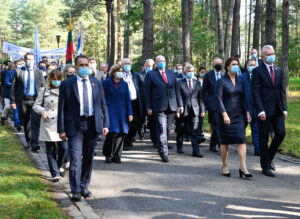