This year 194 educational institutions in Lithuania willingly joined the civic initiative „Memory Road“. Educators and their students commemorated the victims of the Holocaust by visiting the places of the massacres, writing the people‘s names and the place names on pebbles, organising meetings with those who still remember life of their neighbouring Jewish communities. tudents had lessons and were taken on excursions to get to know the Jewish lifestyle, customs and traditions, others produced films or posters, wrote essays, made performances, took care of the Jewish cemeteries or read memoirs.
A few examples of different commemmoration events:
➢ Kėdainiai district Akademija Gymnasium students made a film about the local Jewish community “The History of Dotnuva Jews“ and showed it to the public in the event called “Jewish Life in Dotnuva in XVIII – XX centuries“.
➢ Jieznas Gymnasium students presented a film they made about an artist Jose Gurvich who was born in Jieznas. The film was shown to the town community. A group of students visited a mass grave close to Jieznas lake.
➢ Commemmoration events in Šėta Gymnasium took several days as it took a few of them to collect and decorate pebbles ith inscriptions of Kėdainiai and other Lithuanian place names in Lithuanian and Yiddish. Later on, students set up an installation „Memory Road“ in the school foyer.

➢ In Garliava three schools had their teachers and students unite for a procession through the town to the old Jewish cemetery where they called out the names of Jewish kids killed during the Holocaust. Those three school communities are Garliava Adomas Mitkus Basic School, Jonučiai Progymnasium and Juozas Lukša Gymnasium.
➢ Panevėžys Rožynas Progymnasium students decided to commemmorate the Holocaust victims by drawing posters and having an exhibition hosted by the city municipality.
➢ Kalvarija Gymnasium students and their educators went on a hiking trip.

➢ Vilkaviškis “Aušra“ Gymnasium community read 203 names of Jewish children and students who were killed and buried in Vilkaviškis Holocaust cemetery. A display translated into three languages “The Extermination of Vilkaviškis Jews“ was placed there. Nearby, people planted a young forest to honour the local saviours and erected a stand to boast the names of Righteous Among the Nations.
➢ In Panevėžys the Jewish Community initiated a quiz – discussion for students from different schools on the topic of the Holocaust.
➢ Šiaulėnai Marcelinas Šikšnis Gymnasium in Šiaulėnai and Radviliškis Lizdeika Gymnasium in Radviliškis were the first to read the names of the Jews killed locally. The names of people killed there had not been known up till that day. Local teachers collected the names and made their lists using the information found in Yad Vashem – the International Institute for Holocaust Research. 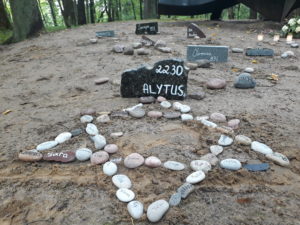