The traditional festival “The Freedom road” brought back the songs, sung by partisans

The traditional event in Druskininkai hosted as many as 20 Lithuanian  schools’ representatives: Alytus, Balbieriškis, Druskininkai, Jonava, Kaunas, Lazdijai, Trakai, Varėna and Vilnius. According to Ronaldas Račinskas, Executive Director of the International Commission, it is a great joy that the Tolerance education center of Atgimimo school in Druskininkai organizes this event every year and it attracts a large number of pupils and teachers from all over Lithuania. The pupils revived the past by singing partisan songs about love for their homeland and aspirations for freedom. The festival was held for the eleventh time in Druskininkai. This year it was dedicated to the Declaration of 16 February 1949, honouring the eight partisan leaders, signatory to the Declaration.

The festival was attended not only by pupils and teachers, but also by former political prisoners, deportees and partisan supporters.

The traditional partisan song festival was organized by Tolerance education center of Atgimimo school  in Druskininkai together with Druskininkai Resistance and Deportation Museum as well as the International Commission as a partner. 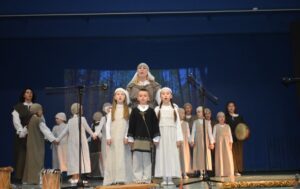